Since 1979, Kéroul has strived to make tourism and culture more accessible to persons with limited physical ability. The organization offers tourist information services, as well as consulting, training and research services for businesses. Recognized worldwide for its unique expertise, Kéroul is also part of several associations and its representatives are involved in a number of advisory boards and working groups.

The 2000s: Kéroul makes its mark and begins looking to the future

Kéroul is the contraction of Québec and roule (the French word for roll or wheel). 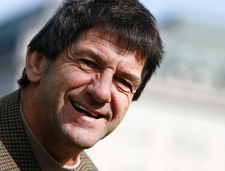 Genuine, energetic, driven, hard-working… André Leclerc is both a dedicated activist and an accomplished businessman. As someone who has been living with cerebral palsy all his life, he has been dealt his fair share of prejudice, but he has nevertheless remained determined to fight it.

That determination is indeed the most striking thing about André Leclerc. Born in Saguenay, and having spent his teens in Sept-Îles and Port-Cartier, André Leclerc left the family nest very early on to spread his wings. André Leclerc had a dream: he wanted to go on a long trip that would take him from Montréal to California, then to Mexico, then back to Quebec via Florida, all this while hitchhiking! In order to combine business with pleasure, he proposed a project to visit persons in the United States who work with disabled persons in order to explore what is being done about their integration and compare it to the Québec approach. Having watched him pull himself around in spite of his handicap since he was just a little boy, his family gave him its full support.

After spending some time in Québec City learning to feed, dress and take care of himself, Leclerc took Montréal by storm. Upon arriving there, he was forced to live in the only place he could find that could accommodate a wheelchair... a seniors residence! That is, until six months later, when he managed to convince the superintendent of the Centre de réadaptation Lucie-Bruneau to let him take up residence there. His room at this rehab facility would later serve as Kéroul's very first headquarters, after the idea came to him like a bolt out of the blue.

One of his major influences, the rehab centre's general manager Jacques Gilles Laberge, firmly believed that travelling is educational for young people and is one of the keys to furthering disabled persons' inclusion in society. Bear in mind that, in those days, most handicapped people lived in institutions and were thus extremely marginalized. André Leclerc was even stopped by police and taken down to the station for trying to hitch a ride, when, back then, there were hitchhikers his age all over Québec's roads. The officers thought he had escaped from an institution... that was what it was like in 1976.

Even though he knew there was lots of work to do, nothing could stop André Leclerc. Now in his early twenties, he decided to start his research with travelling. Beginning with him hitching rides between Montréal and Chicoutimi, it was a journey he hoped would take him all the way to the United States, so that he could see what was being done there in terms of integration, and compare it with Québec's practices.

On home soil and abroad, his travels only confirmed his initial theory: yes, travelling does foster openness, which helps fight prejudice; yes, the subsectors of the tourist industry are numerous and encompass the accessibility of buildings, buses, trains, taxis, airplanes, restaurants, hotels, camp grounds, hostels, etc.—making the industry the perfect arena to promote integration; and, yes, there was a tremendous amount of work to be done!

André Leclerc still heads Kéroul to this day. Over the years, the organization has gained international acclaim for its expertise, and its founder now proudly relies on a small, yet devoted team to provide tourist information services, as well as consulting, training and research services for businesses. Kéroul is also part of several associations and its representatives are involved in a number of advisory boards and working groups.

Things have come a long way since Kéroul was founded in 1979, but the work is far from over. André Leclerc makes no bones about it: "With an aging population, mobility will become an important issue in the coming years." Many are impressed with Leclerc's achievements, but no one is more astounded than the man himself. After all, he is the father of two grown children and he has never stopped believing in his dreams, whether personal or professional. In addition to his career endeavours, he also has plans for a biography and a movie. Interestingly, he even helped comedian Jean-Marc Parent write a bit on disabled people.

André Leclerc has always known exactly where he wanted to take Kéroul, and never once did he question its importance. "Believing is imperative," he says. It has been a lengthy battle, one he still fighting, to turn Québec into the benchmark for accessible tourist destinations! And winning that battle may be easier said than done, since it requires convincing as many people as possible from the tourist and transportation industry to offer adapted services.

Some of the awards and honours that Kéroul's founder André Leclerc has earned over the years.